The author and Pisey, one of the staff from Cafe Fresco on Street 51 & 306
The website and Blog saga continues to trundle along. I haven't been able to post any photos for a couple of days, so my stories are stacking up! At the same time, its all been a bit frantic and looks set to remain so for the rest of the month with at least two trips into the Cambodian wilderness on the cards. In the meantime, last night I went to enjoy yet another wedding, between two employees of another expanding franchise, the FCC group. Nice to see all my friends from Cafe Fresco there, the sandwich & coffee shop I use for my lunch most days. During the day yesterday, I went on my moto tour of a few pagodas west of Phnom Penh as my story below explains - photos to follow. 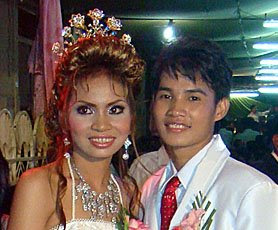 The happy couple - oh, so young
On Saturday evening, I watched the John Pilger documentary, Cambodia - the Betrayal at Meta House after turning on the tv for the first time in months to watch the Khmer kick-boxing championships. Both the Phouthang brothers were fighting foreign opponents though it was sad to see the eldest brother, Ei Phouthang, looking a bit out of shape and losing his bout. He's 36 now, has been a national hero for a long time but perhaps its time for him to retire to coaching after completing over 200 bouts. His younger brother, Outh Phouthang won his bout and collected $1,000 prize money donated by the Prime Minister.
I'm interviewing most days this week at work as we try and get some good quality staff into our ever-expanding tour company. I'm also assisting a documentary film-shoot this week, which I'll tell you more about as it happens. Tonight, don't forget it's the fifth of the public forums on the Legacy of the Khmer Rouge, beginning at 7pm at Pannasastra University on Street 370 in BKK1. Oh, and last Friday I spent all day at an eco-tourism workshop, under the CCBEN umbrella, which I'll also tell you more about in a post this week. It's a hectic schedule, but fun.
News-wise, for the view of the well-respected researcher Sara Colm, on the current Khmer Rouge Tribunal, click here. Colm is from the United States and currently works in Cambodia for Human Rights Watch. She graduated in psychology from the University of California, Santa Cruz, in 1979. Her post-graduate work at Cornell University included Southeast Asian studies and the Khmer language. She also speaks Mandarin and French. In 1992, she moved to Cambodia and helped launch The Phnom Penh Post, the first English-language newspaper published in Cambodia in 20 years. She served as managing editor, wrote stories and oversaw all aspects of newspaper production. Subsequently she worked for the United Nations peacekeeping mission in Cambodia as an information officer and human rights monitor during the 1993 electoral campaign.
Posted by pesex at 2:25 AM No comments: